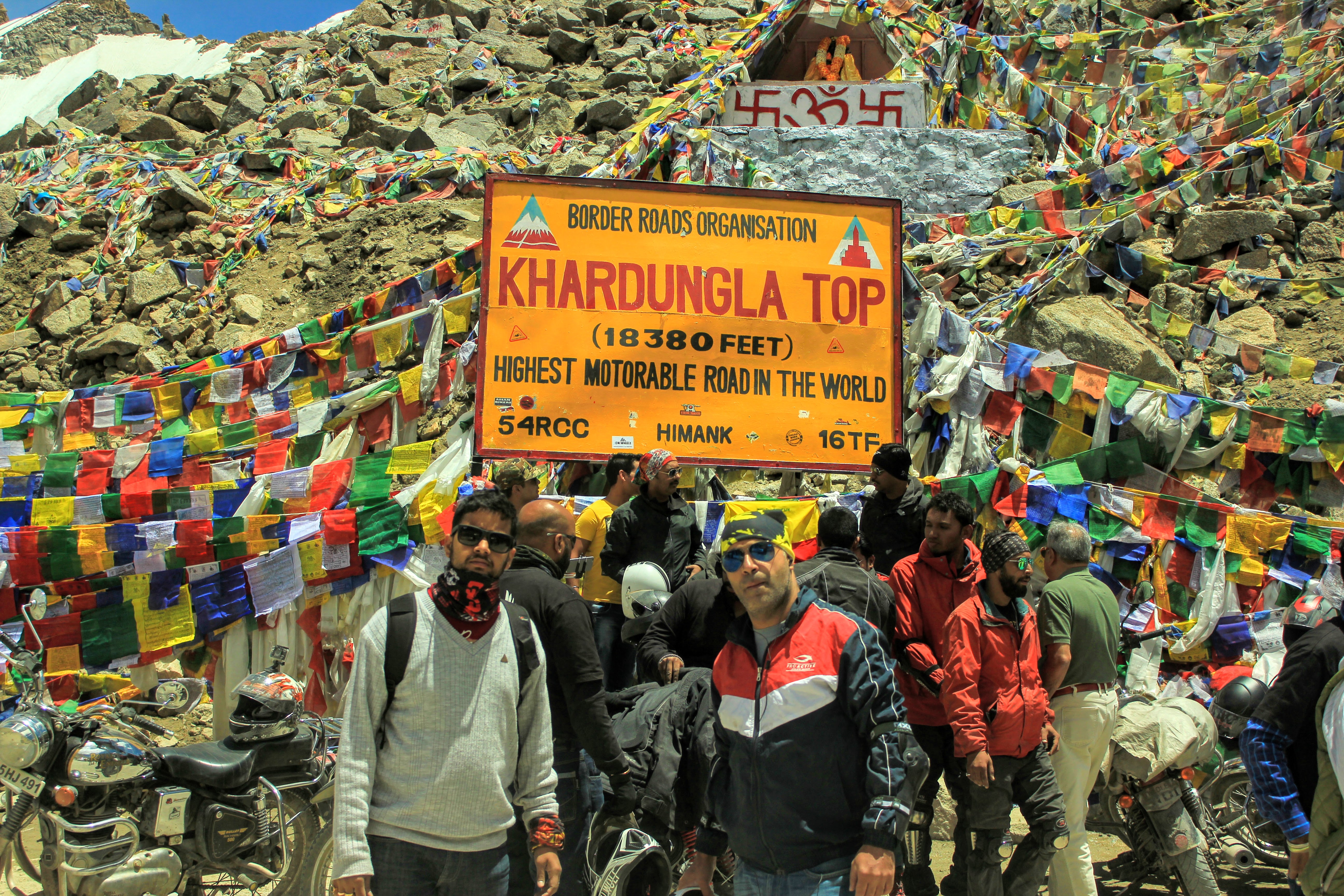 You will find use of “LA” word  in all pass names in Himalayas. In Tibetan language LA means Pass. and KHARDUNLA id father of all passes in India. To us as a traveler it’s a symbol of adventure and accomplishment.

Khardung-La lies in North of Leh and it connects Nubra Valley. Siachen Glacier is on the same direction and way up from this pass. Strategically  this pass is very important to us as this is used to supply materials and necessary things to to Siachen Glacier. This was built in 1976 and opened to public transport and vehicles in 1988.Its a hats off contribution done by BRO aka Border Road Organization. It was their effort that this road was built and still maintained by them only.

The Khardung La Pass, a major tourist attraction in Ladakh, is maintained by the Border Roads Organization aka BRO, and all types of vehicles, from two-wheelers to large lorries, utilize it.

Khardung La stand at a height of 17582 feet or 5359 mtr height. You are not advised to stay at this pass for than 15 min because it may have a adverse effect on your health. It is now worlds 2nd highest motorable road.1st one being Umling La which at at 19300 but now its not allowed for public transport and had been closed for public due to its proximity with China Border.

It is Situated at 40 km from Leh. Initially  road was was made for first 24 km only till South Pullu check point and after that it was mostly lose mud and no rad for last 15 km. Now condition is much better but still due to harsh weather  there be ready for bad roads. Officially now its proper road all the way till Khardungla pass.

Things to see in Khardung La

The thrill of driving the world’s highest motorable road is the main tourist attraction in Khardung La. Along the trip, you’ll be greeted with breath taking views of Leh City and the neighboring mountain ranges. And yes don’t forget to eat Maggi here. Its delicious.

There is a small café there , you may take a lot of pictures and eat noodles, momos, coffee, and tea. In addition, there is a little souvenir shop where you can buy everything you like.

Since its is  extremely low oxygen and air pressure at such a high altitude, you are likely to suffer from Altitude Mountain Sickness, or AMS. It is therefore recommended that you do not spend more than 20 minutes there.

It is recommended that you spend 3-4 days in Leh to acclimate before travelling to Khardung La Pass. To avoid dehydration, bring medicines like Diamox and plenty of water. Sunglasses and warm clothing are required.